While I was working on the light meter for the Nikon FG, I thought of a ‘fix’ that I’d read about for another issue – making the light meter active as soon as the film door is closed. The FG, by default, will only activate its light meter after the film counter is on 1. If you’re like me, you want to get as many frames out of your film as possible, so activating the camera’s light meter as soon as you’ve put in a new film is useful.

The fix for this that I had read about is to solder a piece of wire between the contacts that detect the position of the frame counter. However, that requires soldering. I’ve moved recently and my soldering iron is in a box somewhere. Can’t be bothered with all that.

A memory surfaced, back from the depths of time, about an overclocking hack for the first generation of Intel Celeron computer processors. As I recall, these processors were protected from overclocking. However, you could bypass this protection by drawing a line between two exposed electronic components on the processor chip with a lead pencil. With this conductive line in place, you could modify some of the processor settings and get moar speeds.

You can see, on the right, two points of solder that connect the contacts to the black and yellow wires. The sources I’ve seen suggested soldering a small piece of wire between these two. You could also do the same where the black and yellow wires are soldered to the PCB. But I drew a fairly liberal line of 3B pencil lead between the contacts on the PCB, which you can just see as a smudgy grey line. It works. The meter is now active as soon as the film door is closed.

And, if I ever want to revert it to normal behaviour, all I’ll need is an eraser.

I posted these instructions over on Photrio, but thought I’d post them here as well.

In my last post, I replaced a dud capacitor on a Minolta X-9 that I was given by a friend. The Minolta X-9, otherwise known as the X-300s I believe, is similar to the X-300 and other X-series cameras, but not exactly the same. I couldn’t find specific instructions for working on this camera anywhere. Removing the bottom plate to fix the capacitor is easy, and the X-300 repair manual suffices for many other things, but the top plate is slightly different to the other X-series cameras, so I thought I’d figure out the way to remove it and put it here so others can use it. I mean, it’s really only points 1 and 2 that are different, but sometimes it helps to know things specifically. And I’m starting to think this camera is a bit underrated, once you come to terms with all the plastic.

Sorry for all the dirt in the photos, by the way. 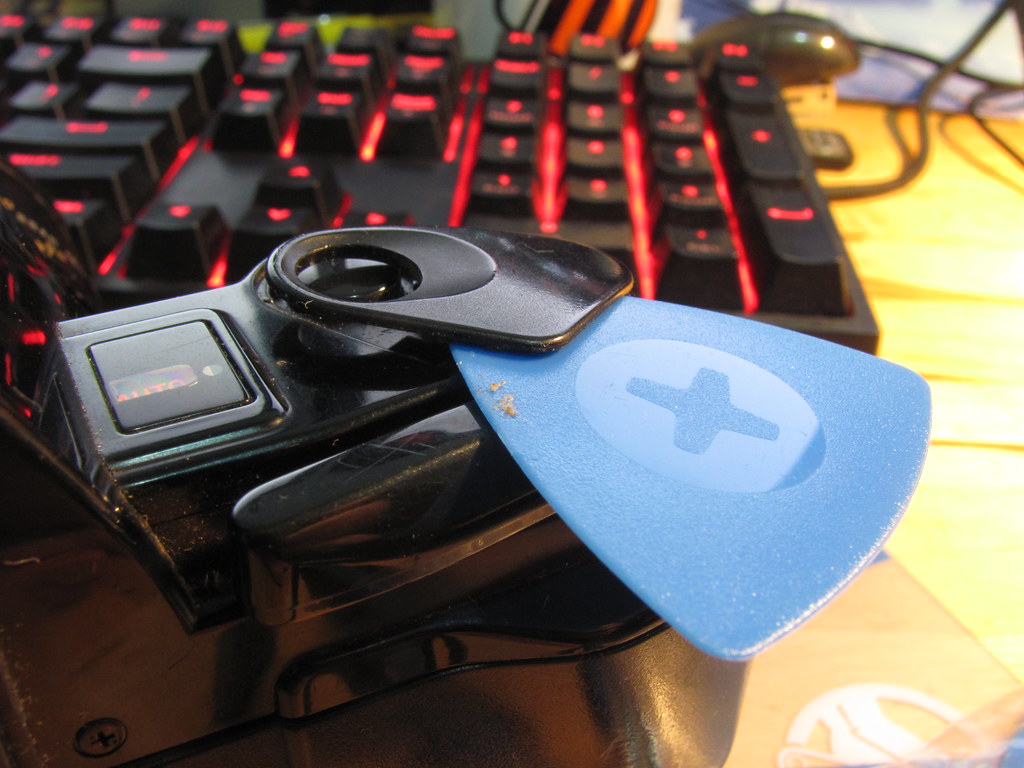 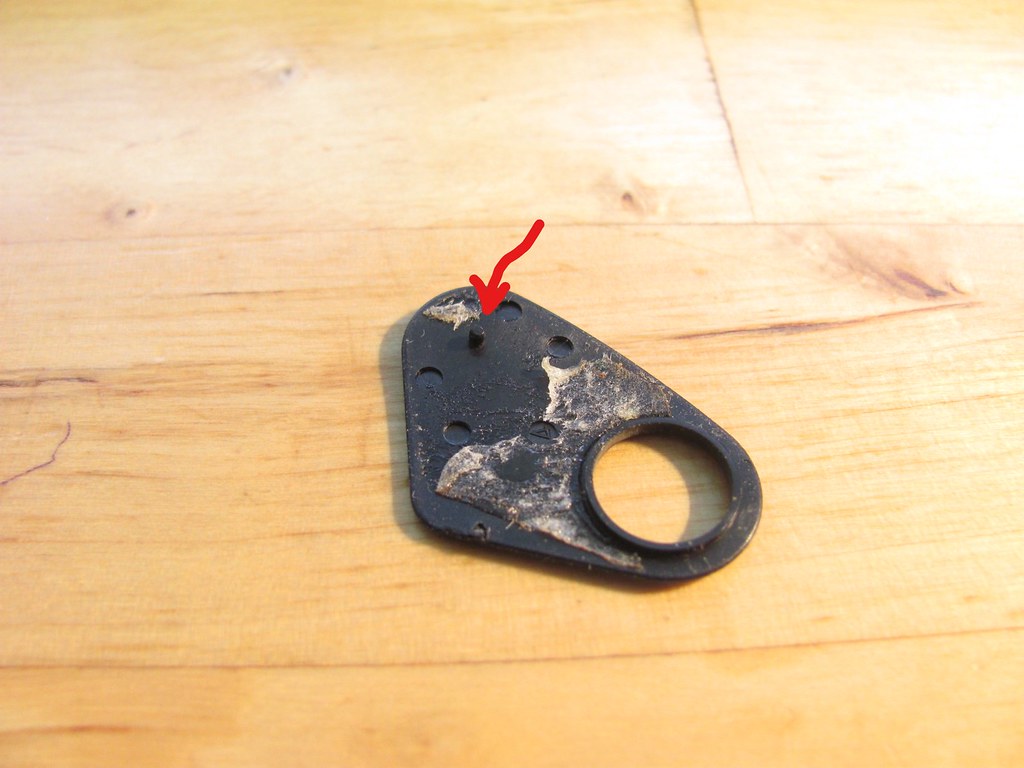 2. There are two screws below the finger plate, marked in yellow. Undo these and you can remove the cover over the shutter speed selection dial and film advance lever screw. (The red arrow is the hole the locator pin goes into.) 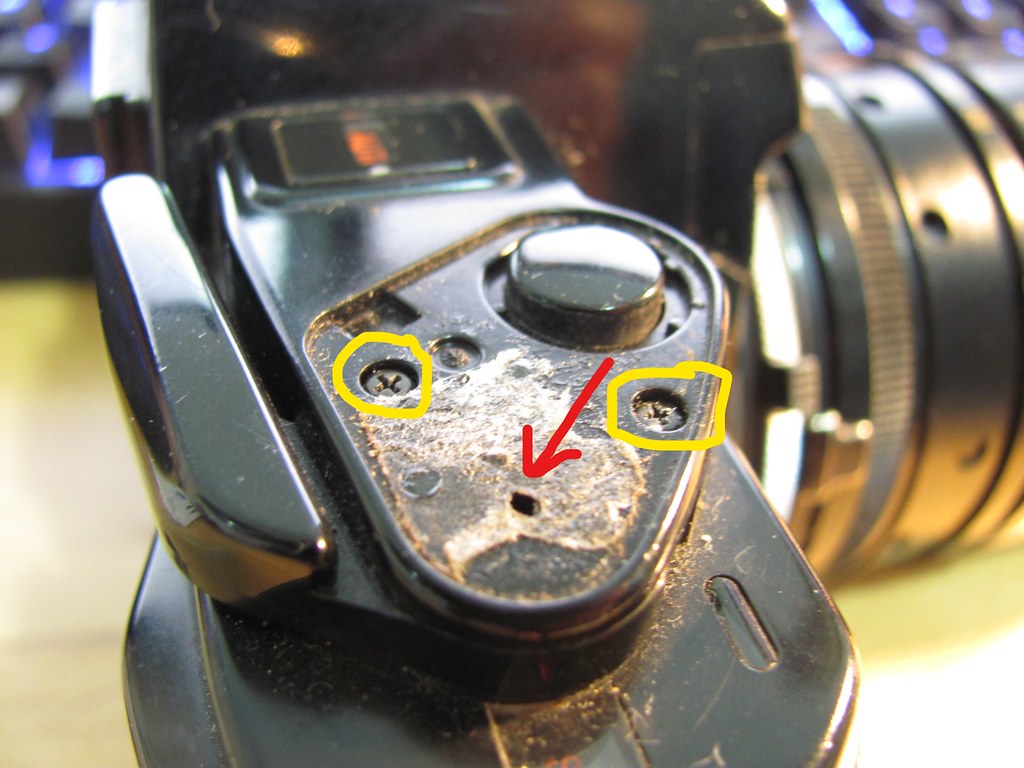 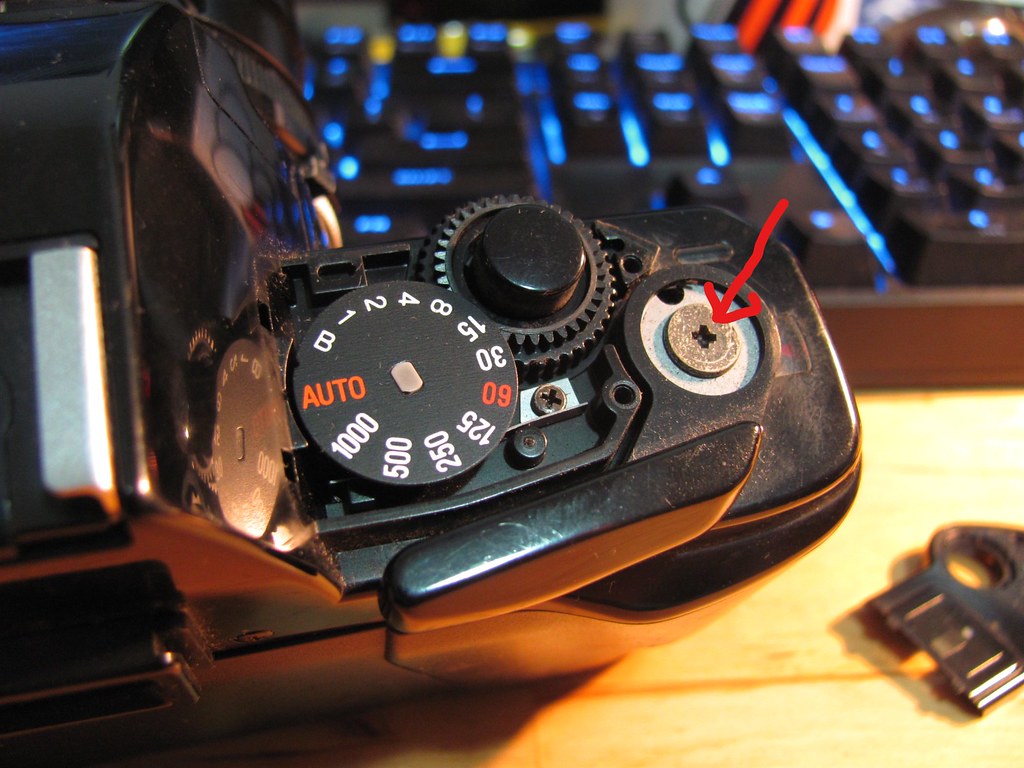 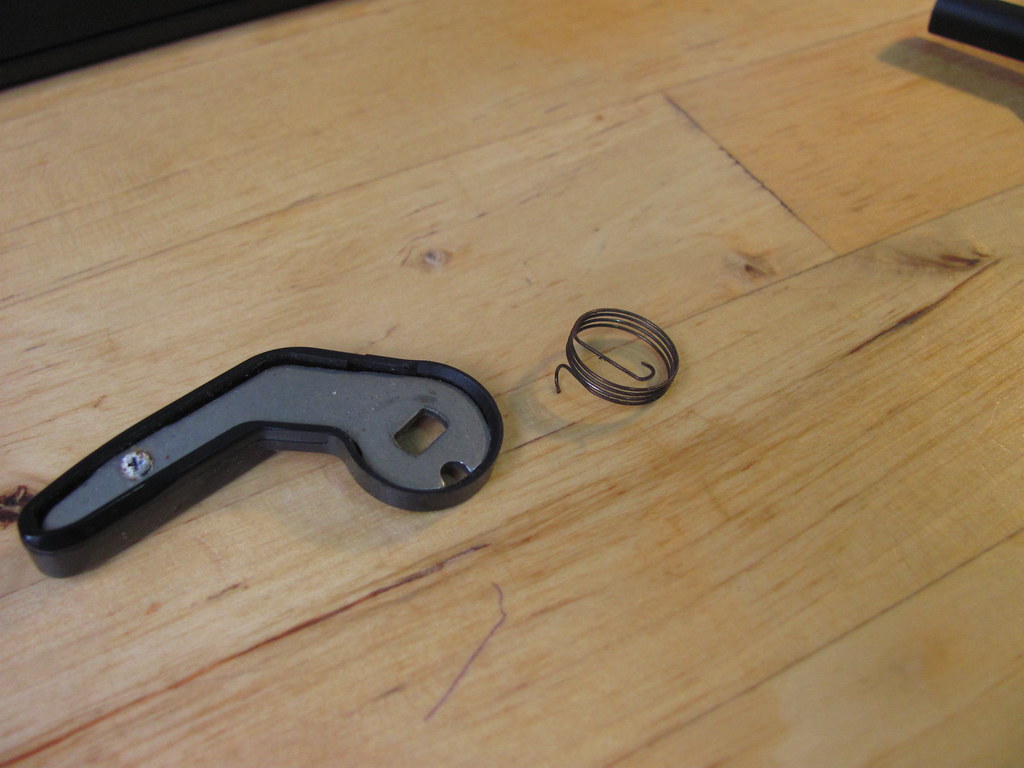 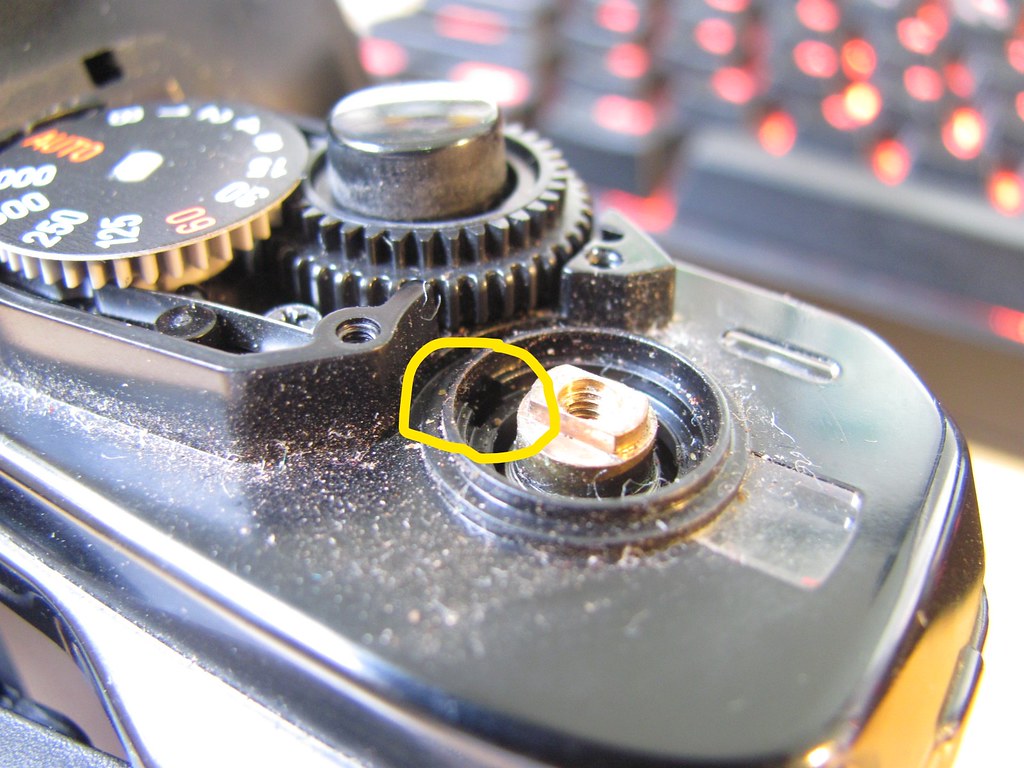 5. Undo the nut around the film advance axle with a spanner wrench. 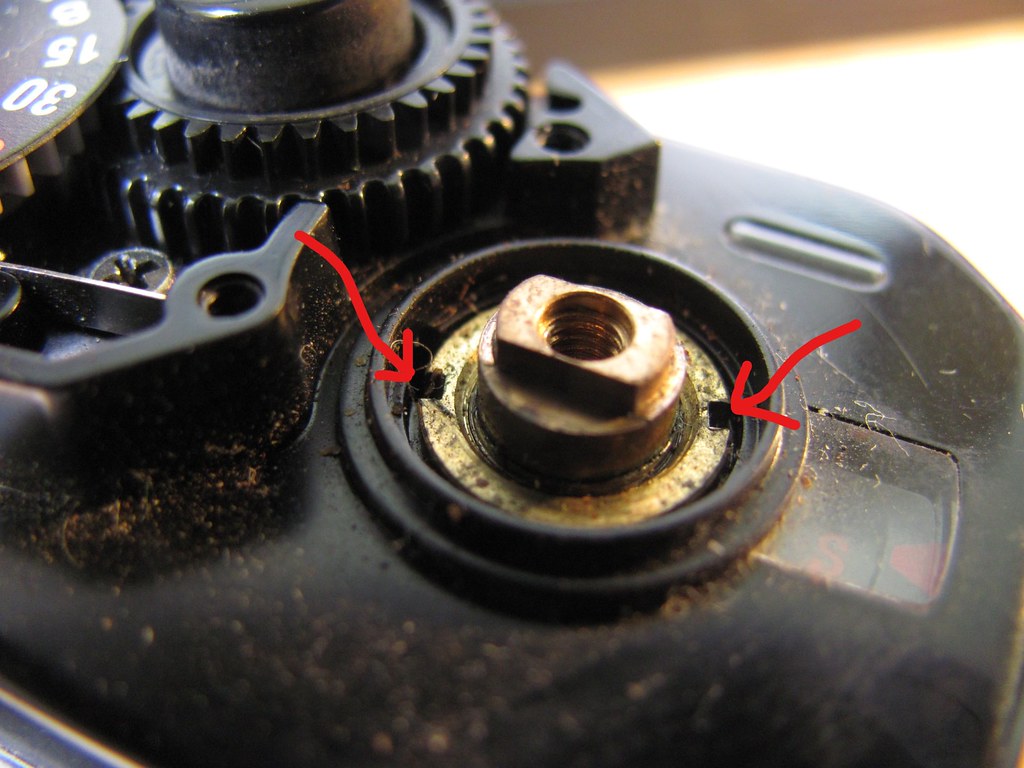 6. Take off the obvious top plate screws: two on either side of the viewfinder, one on the left end, and two on the name plate on the front. 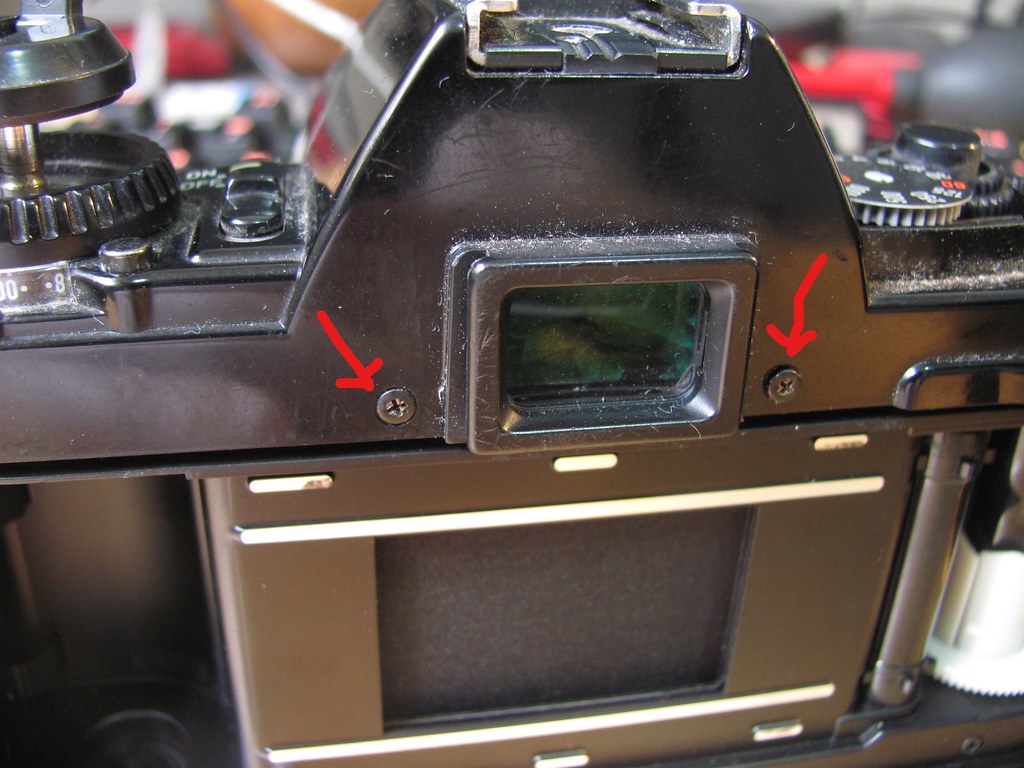 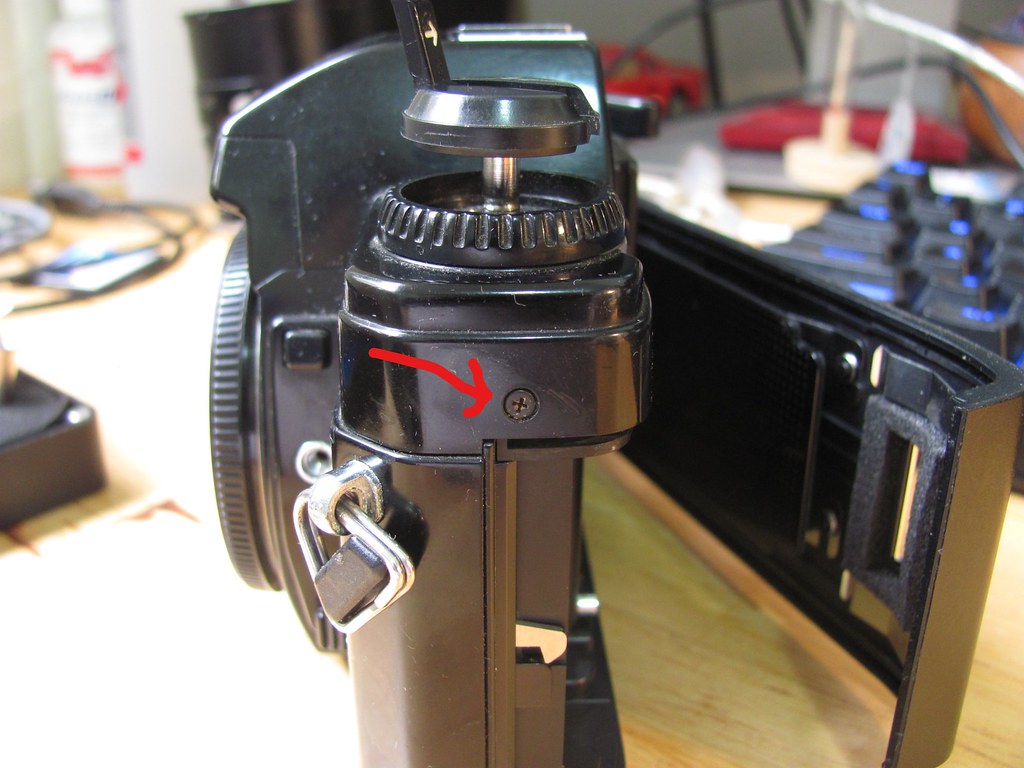 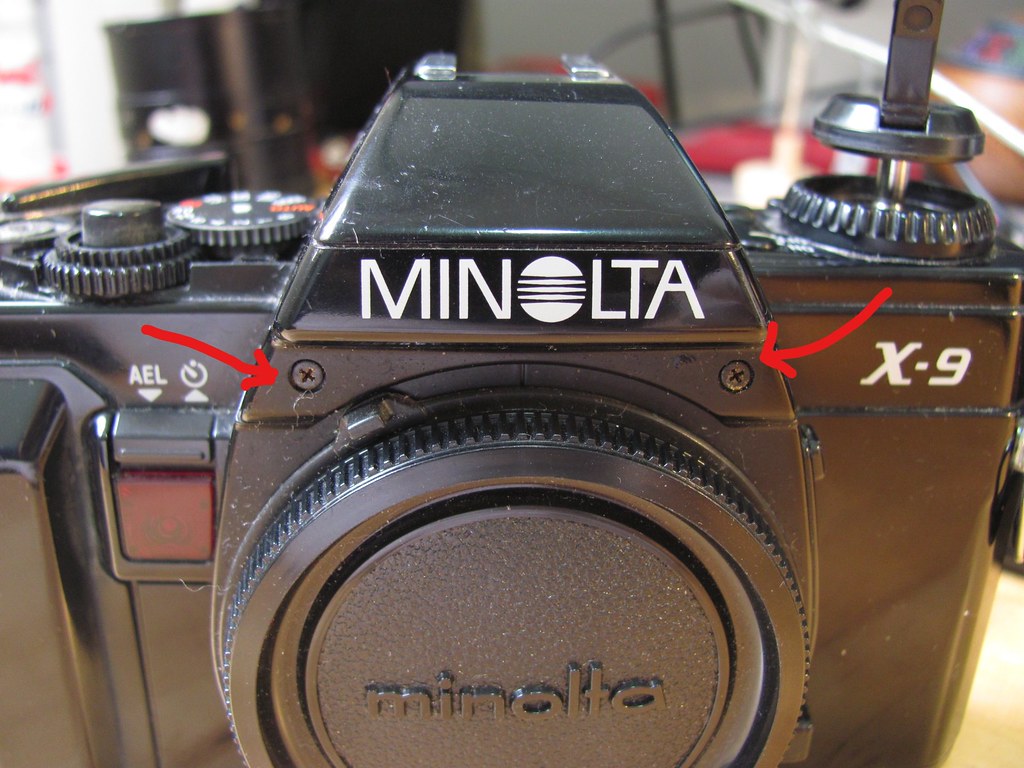 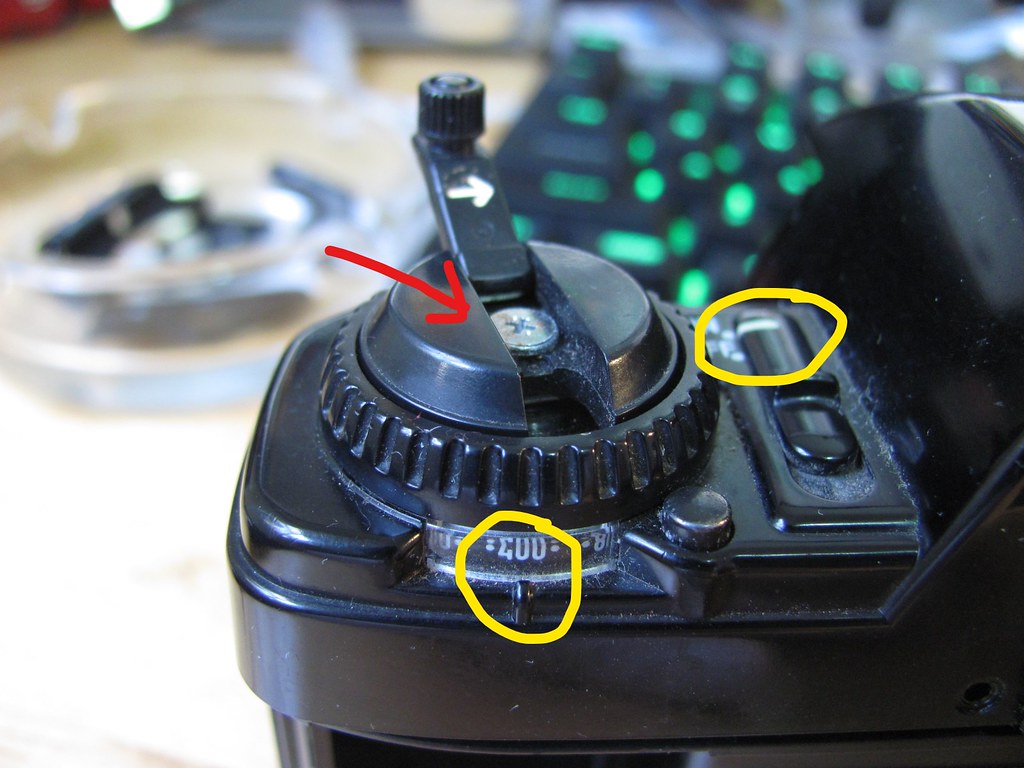 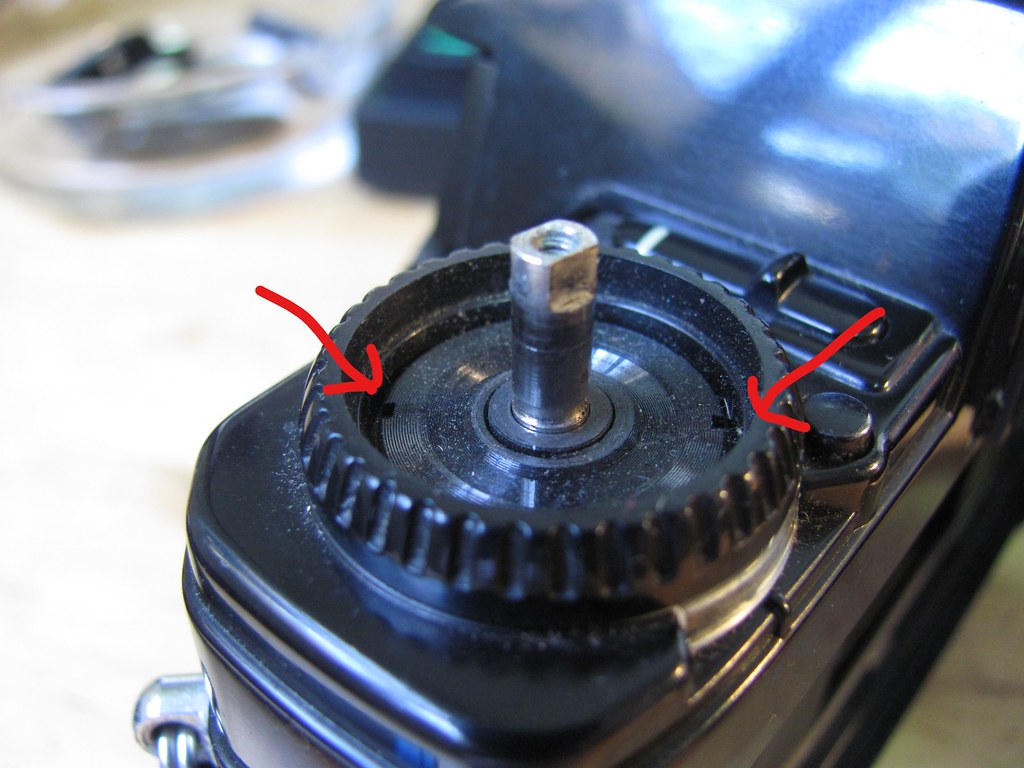 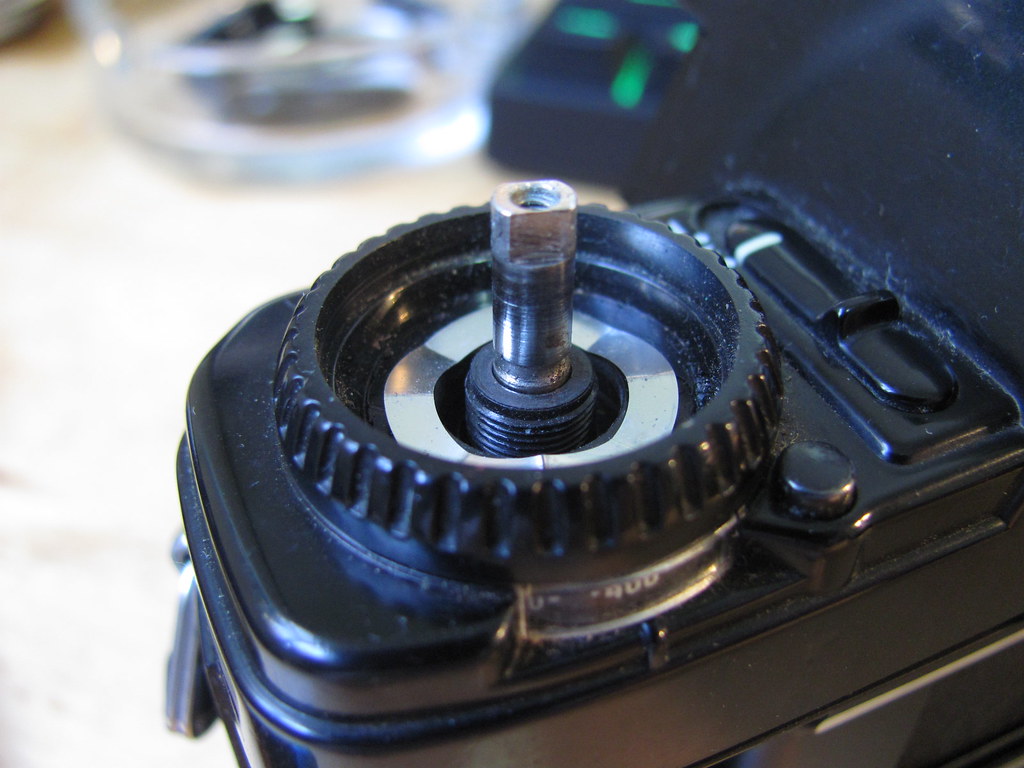 9. You can now take off the top plate. Don’t be too eager, because there are three wires leading to the hot shoe that are soldered on. Desolder them if you need to remove the top plate completely. 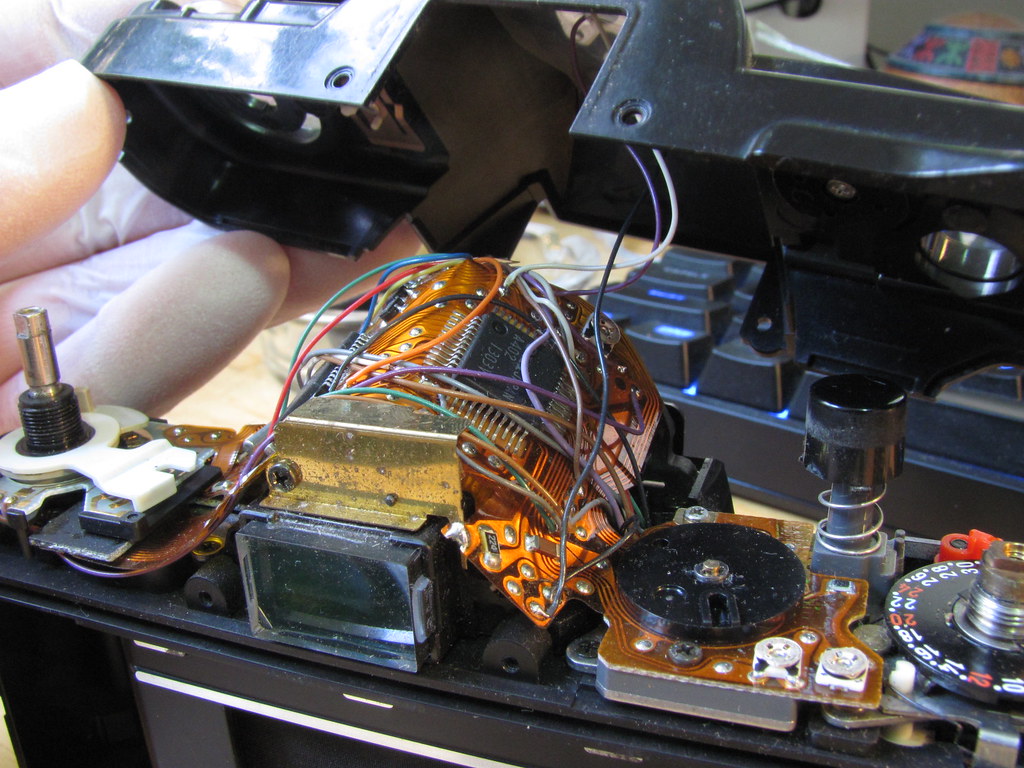 So that’s the top plate removed.

A few pointers on lining things up when reassembling:

– The shutter button has a central pole that goes into a light grey tube near the shutter speed dial. The spring goes on first. There are three tabs around the edge of the button that prevent it from fitting through the top plate, so make sure you put this back before the top plate goes on. 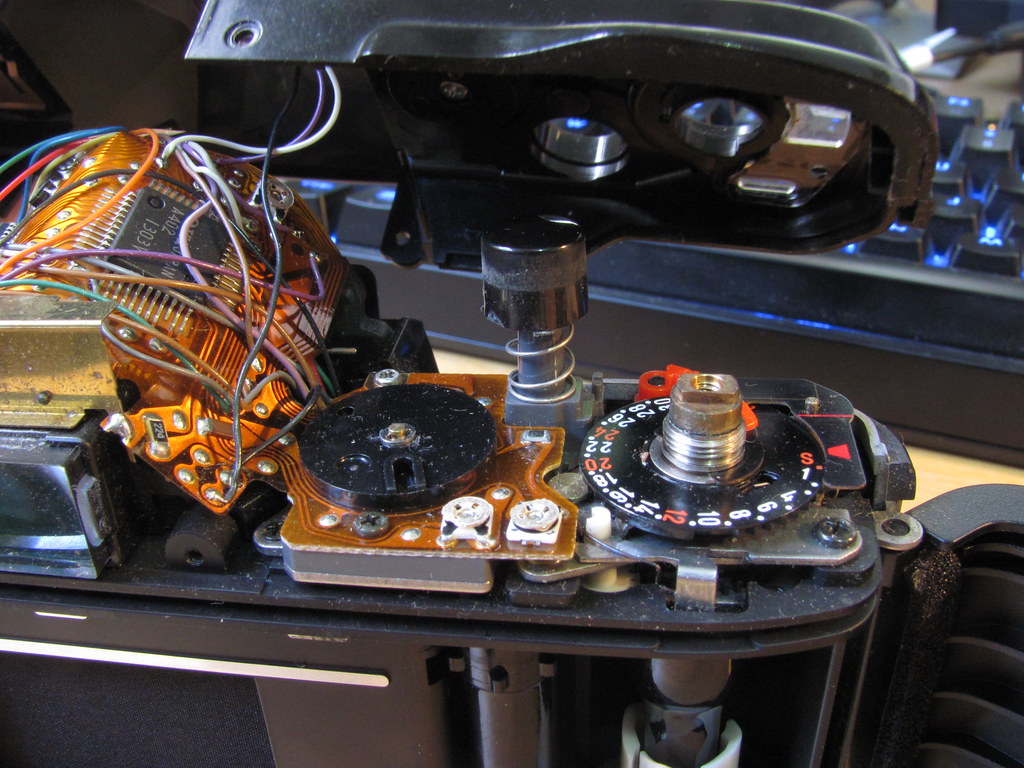 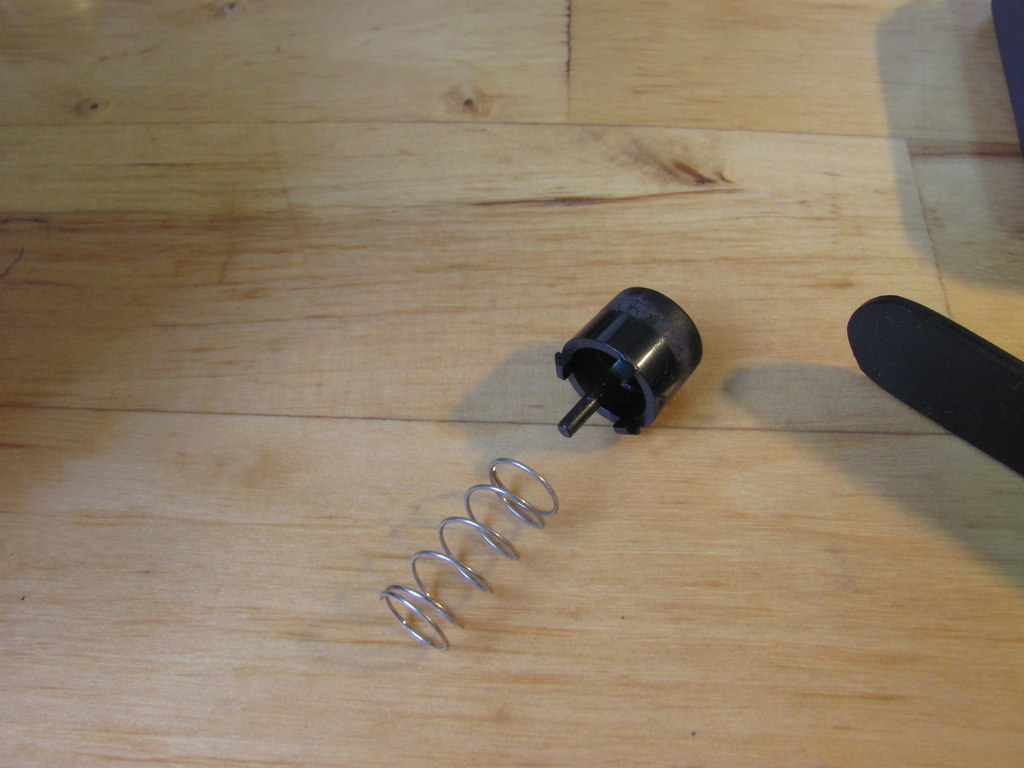 – The viewfinder surround is only held in by the top plate screws on either side of it. There are two channels around its edge – the outermost is for attaching an eyecup or some such, and the innermost sits into the top plate. When sitting correctly in the top plate, the tabs with the screw holes fit between the top plate and the camera body. You might need some extra arms to keep this in place while also lining up the shutter button and power switch when you’re putting the top plate back on. 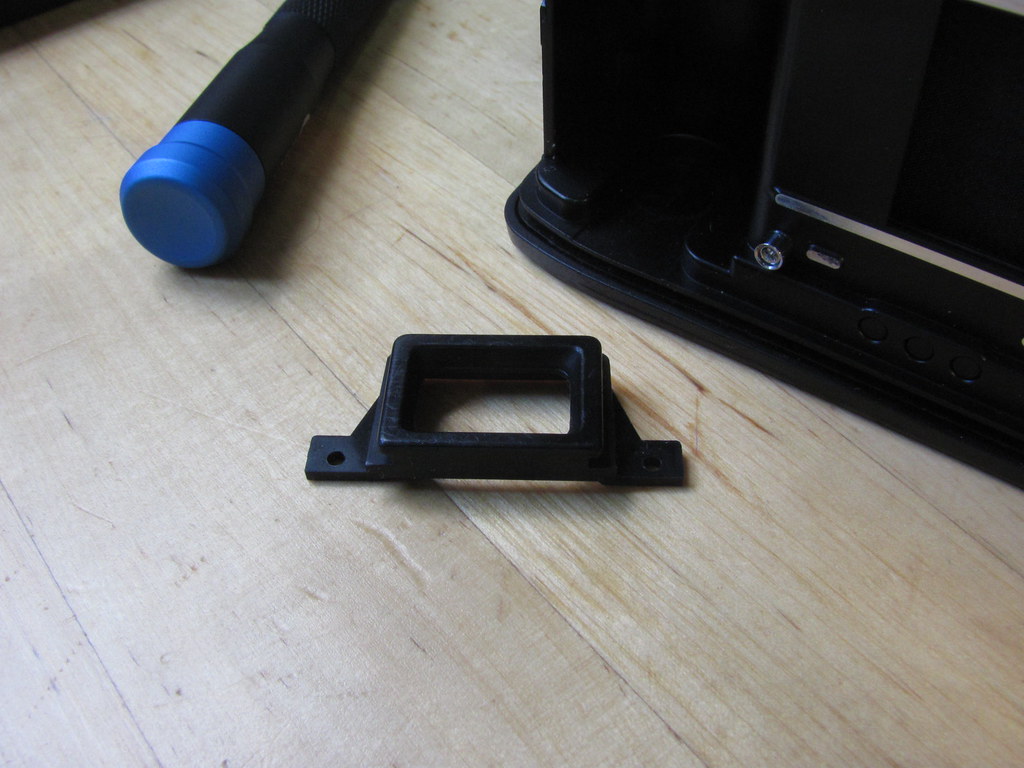 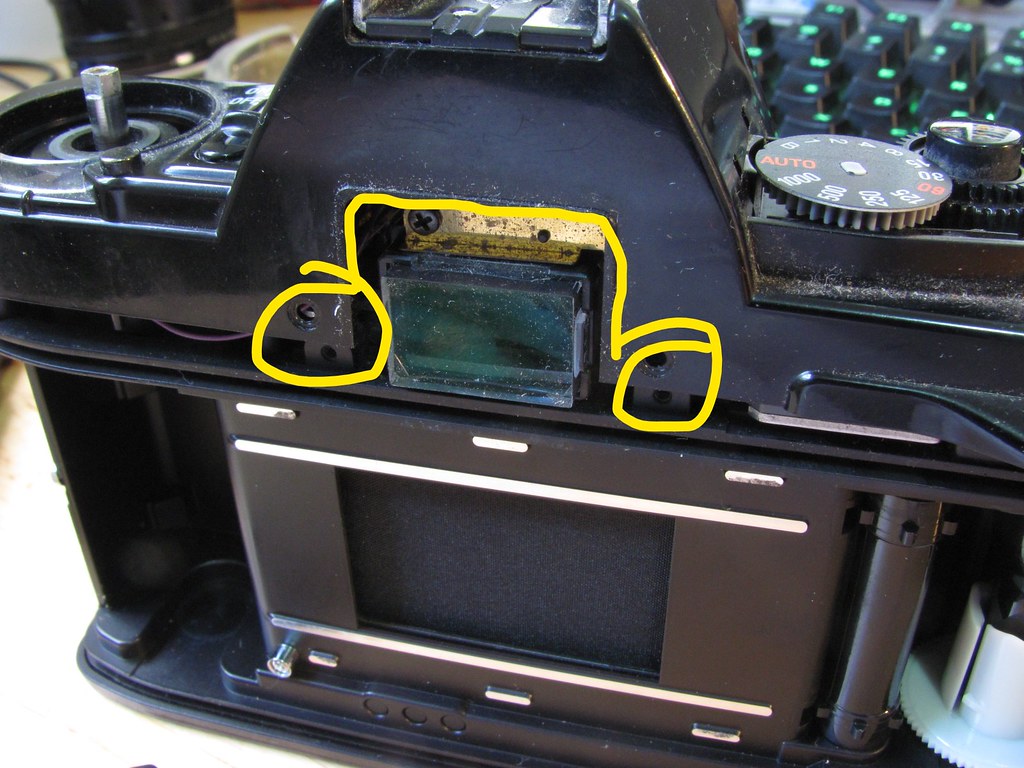 – The power switch actuator is the white lever near the rewind pole. The power switch interfaces with the U-shaped indentation at the end of the lever. (The ISO interface pole is behind the axle – just ignore that arrow.) 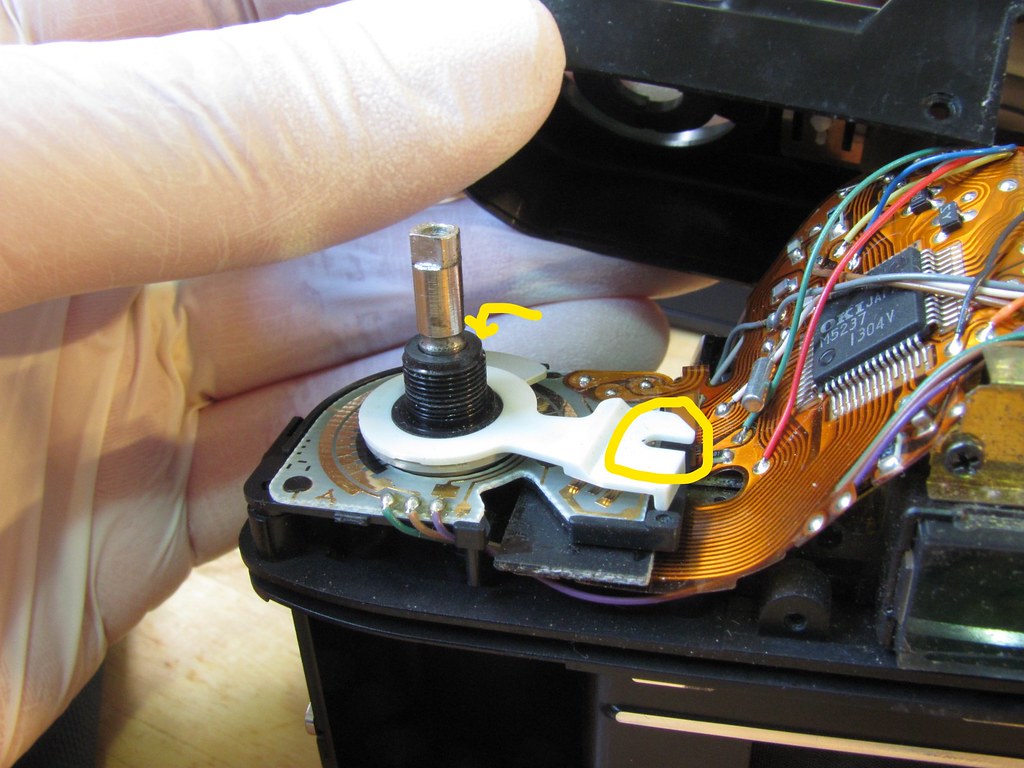 – When the top plate is back on, but before you replace the ISO selector wheel, you can tell if the power switch is interfacing properly by viewing the switch through a hole in the top plate.

Switch set to Off: all white (lever is directly below the hole) 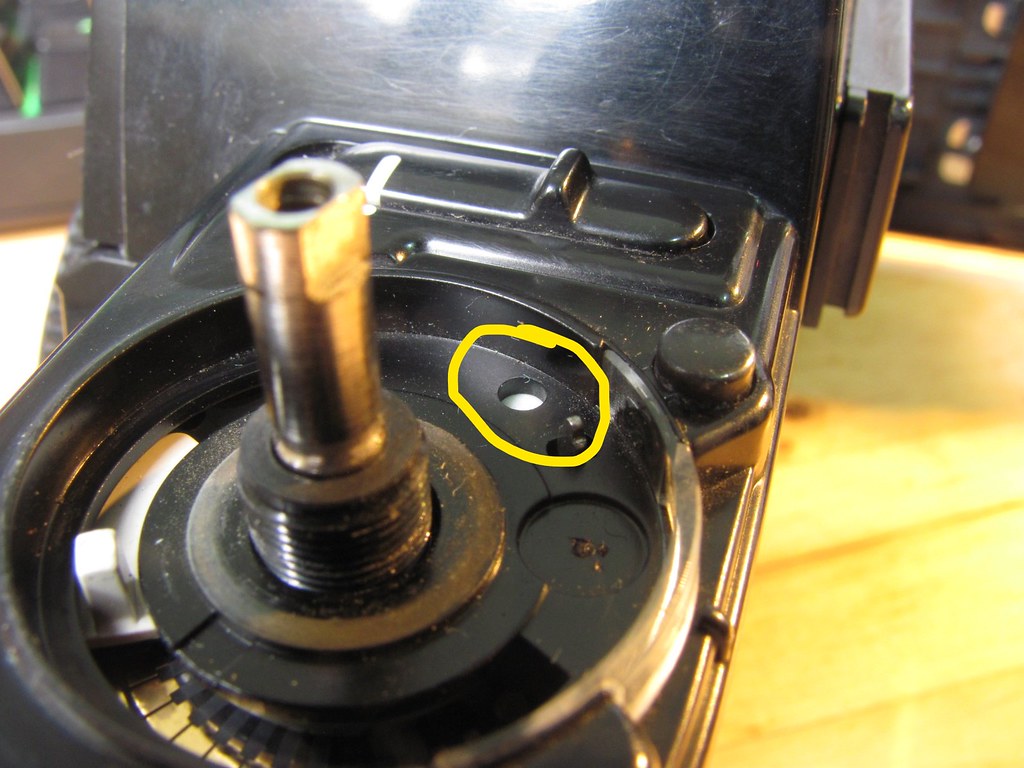 Switch set to On: half white half empty (looking at the edge of the lever through the hole) 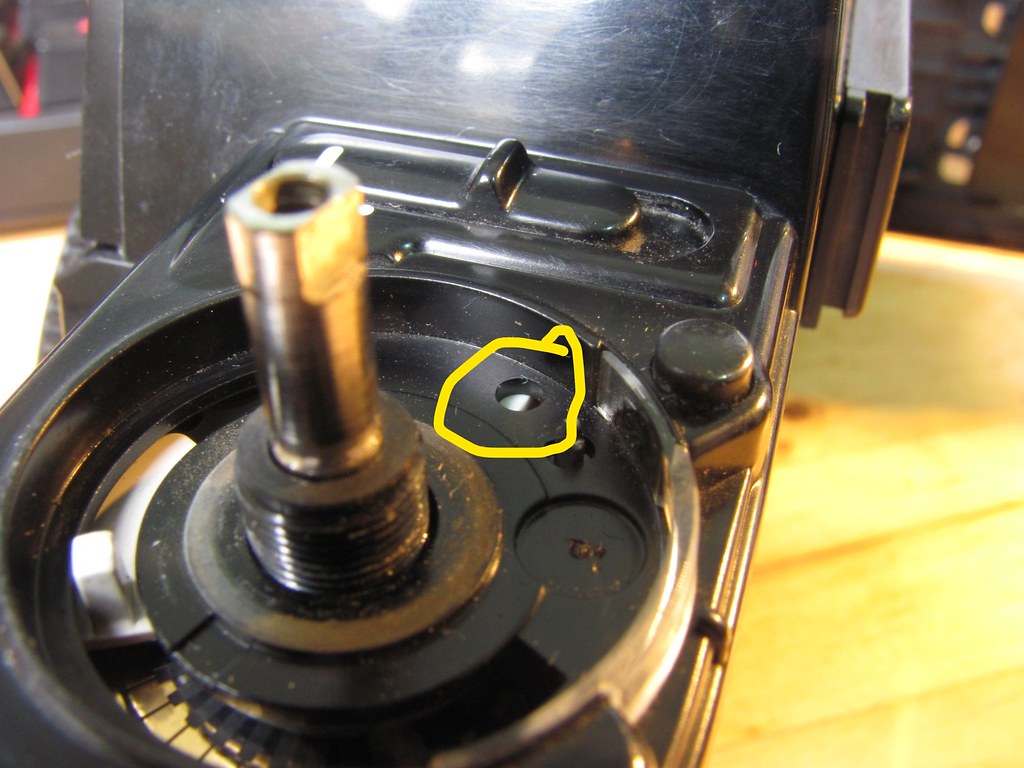 – The ISO selector wheel has a hole on its underside that interfaces with the grey pole you can see at the far left of the two pictures above.

Last year I bought three enlargers from a family friend, who also threw in a bag of other camera stuff. This included a Nikon F4 and a Minolta X-9, neither of which worked properly. The F4 is my dream fix, but it’s a complicated beast. The X-9 (also called/very similar to the X-300S or X-370N) is a simpler machine by anyone’s estimation. Judging by resale prices, it’s considered outright basic. I am getting the impression, though, that it can easily outperform expectations as long as you can look past its gloriously 1980s plastic shell.

According to the internet, many of the later Minolta X series cameras are prone to a capacitor failure. An affected camera will appear to work until the shutter button is fully depressed, at which point the camera will power down; because the shutter never releases, the film advance lever can seem stuck. This Minolta X-9 displayed exactly this issue – the light meter would work on a half-press of the shutter button, but then the camera would die as soon as I pressed further.

I opened the bottom of the camera to have a look. Not without difficulty – I stripped the head of the screw nearest the capacitor in question. It was very stiff and I suspect it was slightly corroded by the residue from the burst capacitor, traces of which could be seen on the underside of the base plate. The plastic at the base of the capacitor, between the pins, was protruding further than it should, indicating that it had burst through the bottom and towards the screw.

The most difficult part of this repair, for me, was learning to solder and desolder. This is a skill that I have come to learn is essential for repairing cameras – almost any camera made after 1970 seems to have parts that can only be removed after certain wires are desoldered (even the Voigtländer Bessamatic, which is a chaotic mechanical masterpiece). Thankfully, there is an electronics retailer in Australia that still provides an abundance of educational materials and affordable supplies for learning to solder. I learned the basics by making a small device with two flashing LEDs. This was a bit challenging, as I had decided to use lead-free solder for safety reasons, and my soldering iron tip was old and corroded; things got easier when I replaced the tip, and I was able to complete the device. Then I tried to unsolder it, found this difficult and gave up, and put it back together. As it still worked, I figured this was a good enough start…

Heady with my success, I dived straight into replacing the capacitor on the Minolta X-9. The old capacitor came off easily enough, so I trimmed and bent the pins of the new capacitor (took a while to find replacements with the same specifications and dimensions, but it is possible) and forged ahead. It’s a bit tricky to get the right alignment, since there’s not much support for the capacitor and you’re soldering it to a flexible circuit. I screwed up the alignment at first and had to re-solder it, and given the higher melting point of lead-free solder I was pretty afraid that I’d cooked something. Doubly so, when I put some batteries into the camera and nothing worked at all.

I checked continuity between the capacitor pins and the next components on the flex circuit, and that was all fine. I measured voltage at the flex circuit and it checked out at around 3V, as it should have. But the camera wouldn’t even turn on. I was certain I’d killed it. And it’s not even a nice-looking paperweight.

When nothing works, go back to basics.

To test the camera, I had been using batteries straight out of my Minolta XE-5. These batteries were powering that camera’s light meter just fine, and they were measuring in at the correct voltage, so I assumed they were ok. But then, just in case, I put in a fresh pair of batteries. I pressed the shutter button. It fired. I pushed the film advance lever. It moved. I did it again. And again. And again.

Now, I know this is a basic camera, a manual focus SLR released at the time Minolta was well into its autofocus phase. It has only two or three more functions than the XE-5, which is about 15 years older. And it looks very much like an SLR and Darth Vader’s suit were spliced in a teleporter incident. However, it’s the first camera that I have resurrected from a state of complete malfunction. I’m pretty pleased with that. And in the process, I’ve seen some indications that the functions it does have are well implemented. When I ran a test roll of film through, it was comfortably familiar to shoot with, and it was plastic enough that I didn’t feel compelled to treat it like porcelain, so I quite enjoyed the experience. I might post a review up here sometime.