A couple of months ago, just before the birth of my son, I fixed the film advance on my Minolta XE-5. The lever had not been completing its action properly, and when it got to the end of its rotation there would still be some film winding left to do, so it would just return loosely. It had to be pushed to the end of its travel again before the action would complete, the lever would return under spring action, and the shutter would be unlocked.

The XE-5’s plastic prism cover, though potentially more fragile than metal and (in my opinion) a slightly questionable aesthetic design choice, has the benefit of separating the top plate into three sections: the prism cover, and left and right covers made of metal. This simplifies some repairs, because if you only have to make a repair on one side, you don’t have to disassemble the other. 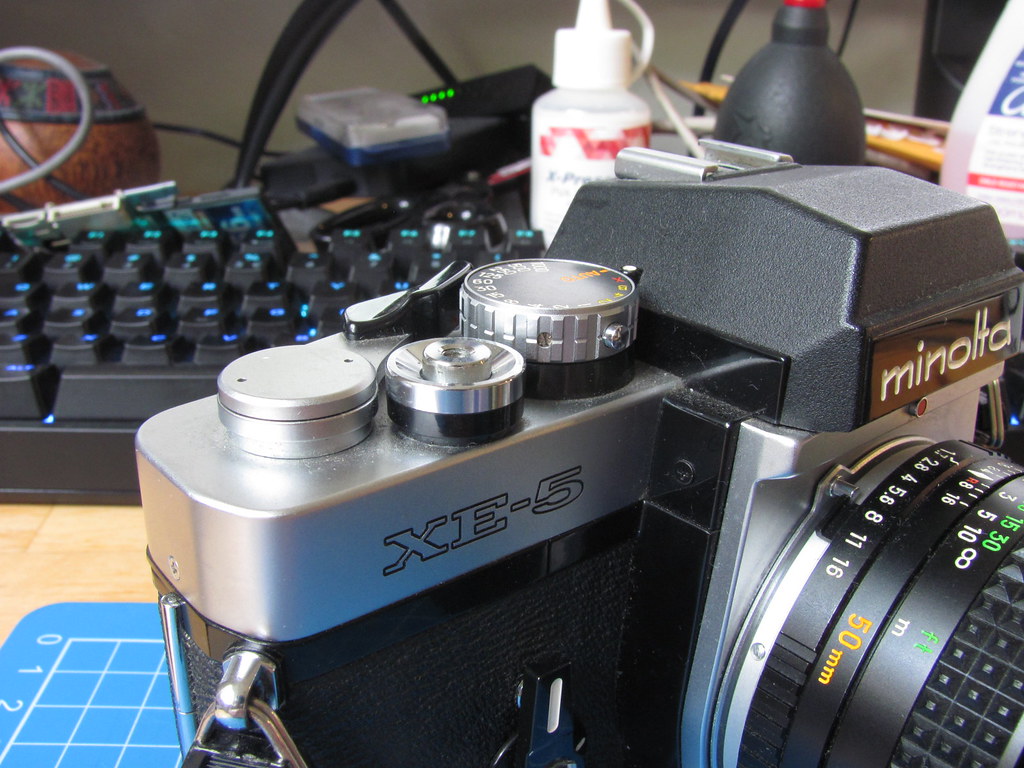 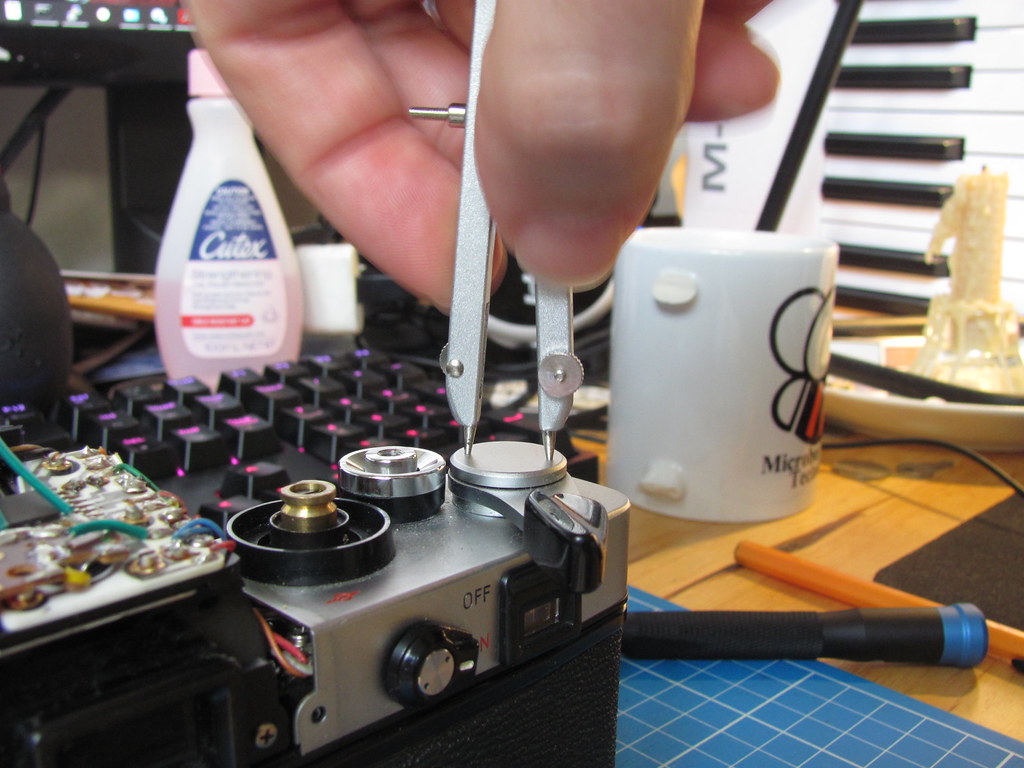 There’s not too much complicated about the top plate removal beyond making note of where things were aligned. I had the shutter speed dial set to Auto just as a reference (and to keep the dial from being moved), and I left the power selector set to On so that the shutter could be released while disassembled (for testing the winding function). Also important to align correctly is the strangely shaped part below the brass spring in the photo below, which interfaces between the film advance lever and its axle. The easy way to remember its alignment is tho make sure the larger, stronger tongue is on the left, as this is the part that transmits the lever’s force in an anticlockwise rotation. 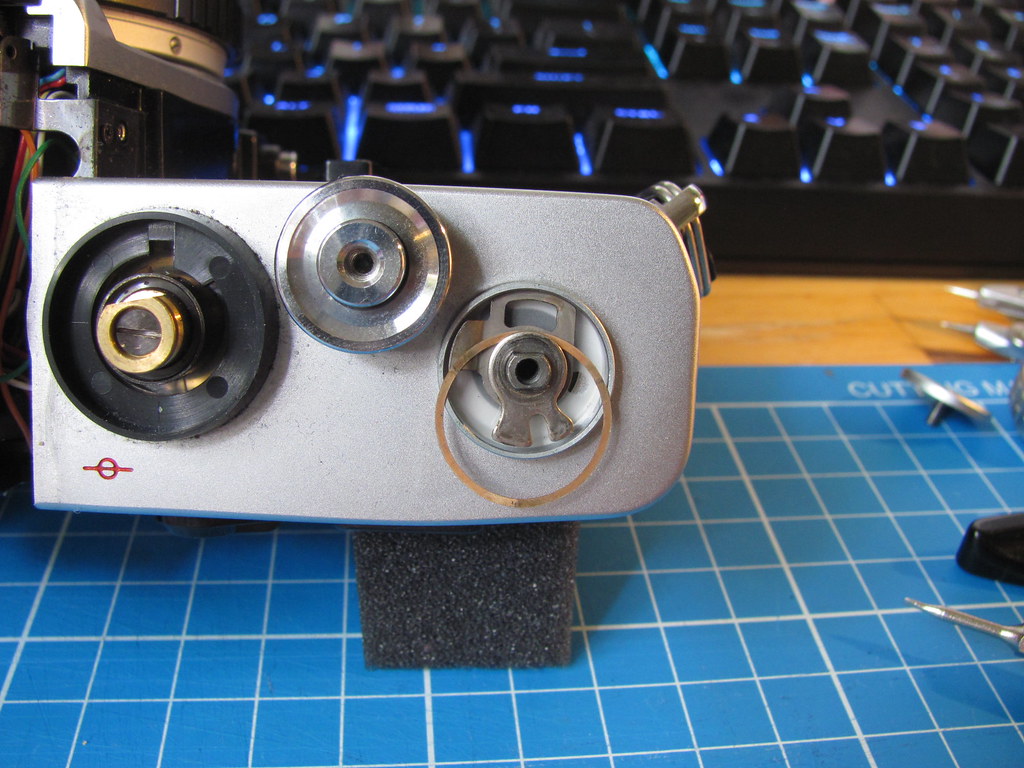 Once the top right cover is removed, you can just access the rachet that governs disengagement of the film advance lever, which needs to be cleaned to remove the gunk causing the issue. The ratchet is connected to the small brass pin that is between the two arms of a spring – in the photo below, this is below the PCB (gotta love those 1970s electronics!) and just to the right of the silver screw near the strap lug. You can tell that this is gunked up by moving the pin – it may be stiff. 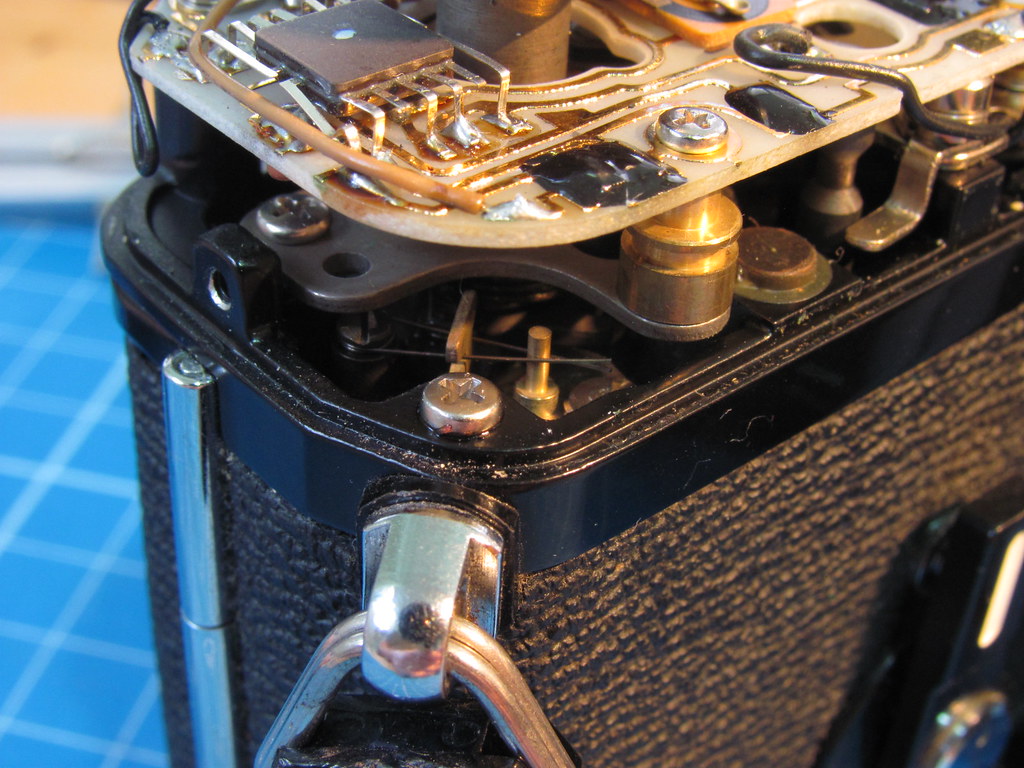 I cleaned the ratchet’s pivot and the end of the ratchet itself (where it engages the toothed plate connected to the film advance axle) with some isopropyl alcohol on the end of a toothpick that I’d whittled to a point, just dabbing on a small drop and waiting for it to dissolve the gunk and evaporate. I then applied a small amount of light synthetic oil to both areas. I could immediately feel that the ratchet moved more smoothly and quickly. I put the strangely shaped part and the advance lever back on top of the film advance axle temporarily and went through the fire-wind sequence a few times to check the repair was effective – the advance lever returned at the end of each stroke as it should, with no extra push necessary.

This camera has the smoothest film advance mechanism I have ever felt. It takes even less effort than a Voigtländer Vito C-series film advance, despite having a much more complicated shutter to charge. In fact, now that it’s fixed, it feels more broken – it is so smooth that it’s difficult to believe it’s working. I am a little bit in awe.